The proportion of boys and men in yoga is around 17%, a near mirror image of the percentage of girls and women in chess (14.6%). Despite yoga and chess primarily appealing to different genders, at least three U.S. businesses successfully combine the two pastimes. For this article, I asked those business owners if they have encouraged crossovers, such as yoga devotees playing chess games or chess players in yoga postures. I also asked how yoga novices should pick yoga types or postures, and studios or teachers. In chess, ratings indicate the chess content knowledge of teachers.

Although there are chess variants (bughouse, Fischer Random), most players’ improvement efforts are directed at their classical or rapid chess ratings. One can search US Chess ratings or FIDE (International Chess Federation) ratings to assess potential teachers’ chess content knowledge, though those ratings do not assess teaching skills. In contrast, yoga has at least eight types and, according to an article by Melinda Matthews, “hundreds of yoga postures.” Matthews gave this rather ominous warning about the importance of finding yoga instruction: “if you’re a novice, don’t attempt the postures in the photographs without receiving more detailed instruction about getting into and coming out of the poses.”

Matthews provided an instructional video aimed at chess players in 2013. Matthews, who now serves as editor of Chess Life, described herself in 2014 as a “yoga devotee” whose “passion for yoga” was similar to the passion felt for chess by her son, NM Nicky Rosenthal. Matthews’ article presented historical similarities between chess and yoga. For example, Matthews wrote, “The game credited as chess’ forerunner is called chaturanga. Chaturanga also happens to be the name of a common yoga posture.” Matthews also gave practical ideas, such as yoga poses for back flexibility, to help chess players since they may have spent “too much time sitting at the board.” In the six years since Matthews’ article and video were published on Chess Life Online, businesses are combining chess and yoga. I profile three of those businesses here. Mississippi The Franklin Chess Center in Meadville, Mississippi, offers free chess and yoga classes to students attending Franklin County Schools. The classes are unusual offerings for rural Mississippi and are funded by the 501(c)3 Southwest Mississippi Chess Foundation. Dr. Jeff Bulington is the foundation’s director and is the lead instructor of the chess classes. The Franklin County Chess program was featured on 60 Minutes in 2017.   Susanne Bulington, Jeff’s wife, teaches the yoga classes. Susanne is an Intermediate Junior 1 Certified Iyengar Yoga Teacher (CIYT) and Yoga Alliance RYT-500. For more information about Iyengar Yoga, visit the website of the Iyengar Yoga National Association of the United States (IYNAUS). Yoga classes are held in the skittles annex of the Franklin Chess Center. Chess students ages 10-16 (4th through 10th grade) may elect to take a one-hour yoga class twice weekly (4:15-5:15 p.m.). Yoga class attendance ranges between 6 and 17 participants, of which approximately 60% are boys. In March, a 1st through 3rd grade yoga class will be added to the center’s offerings. 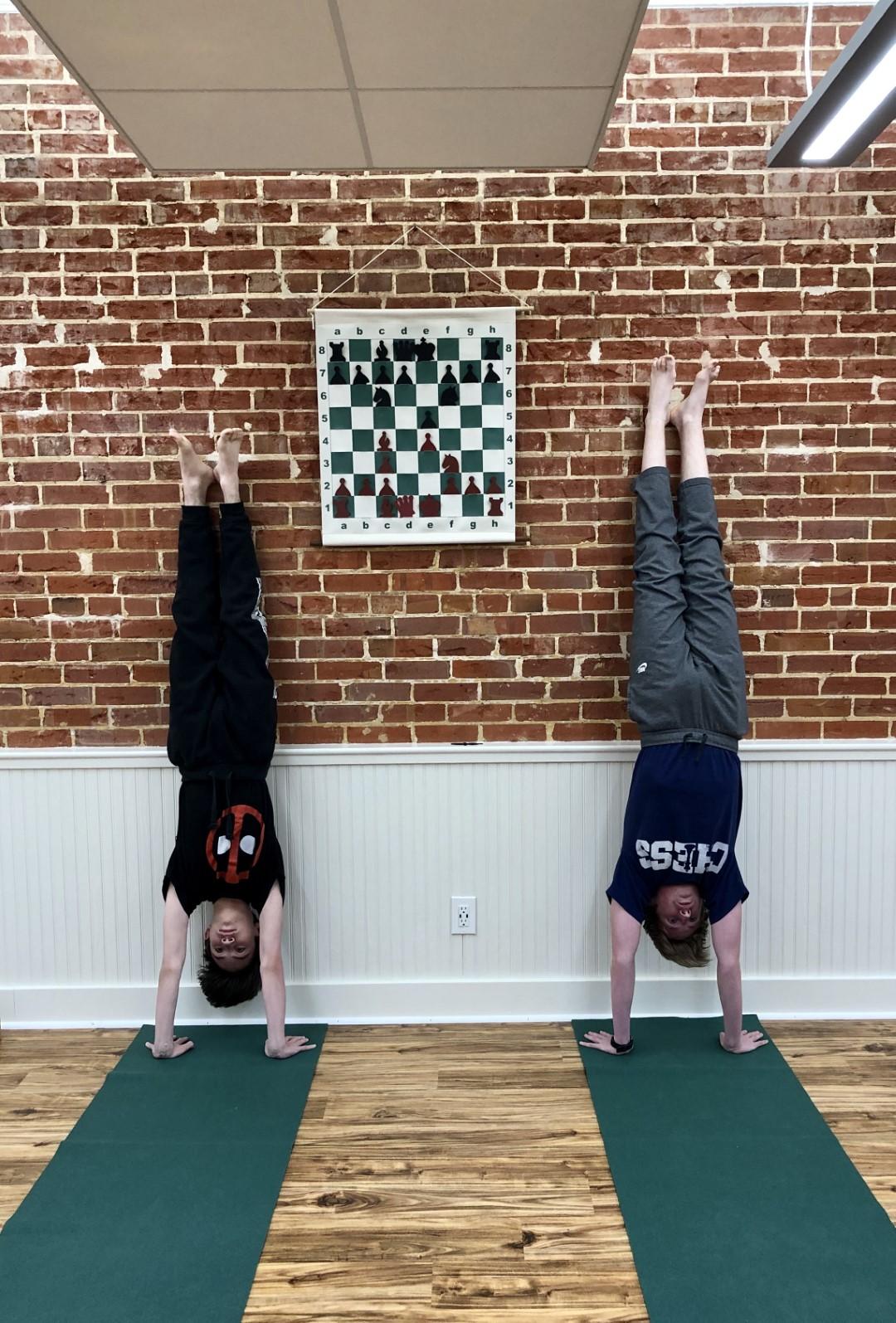 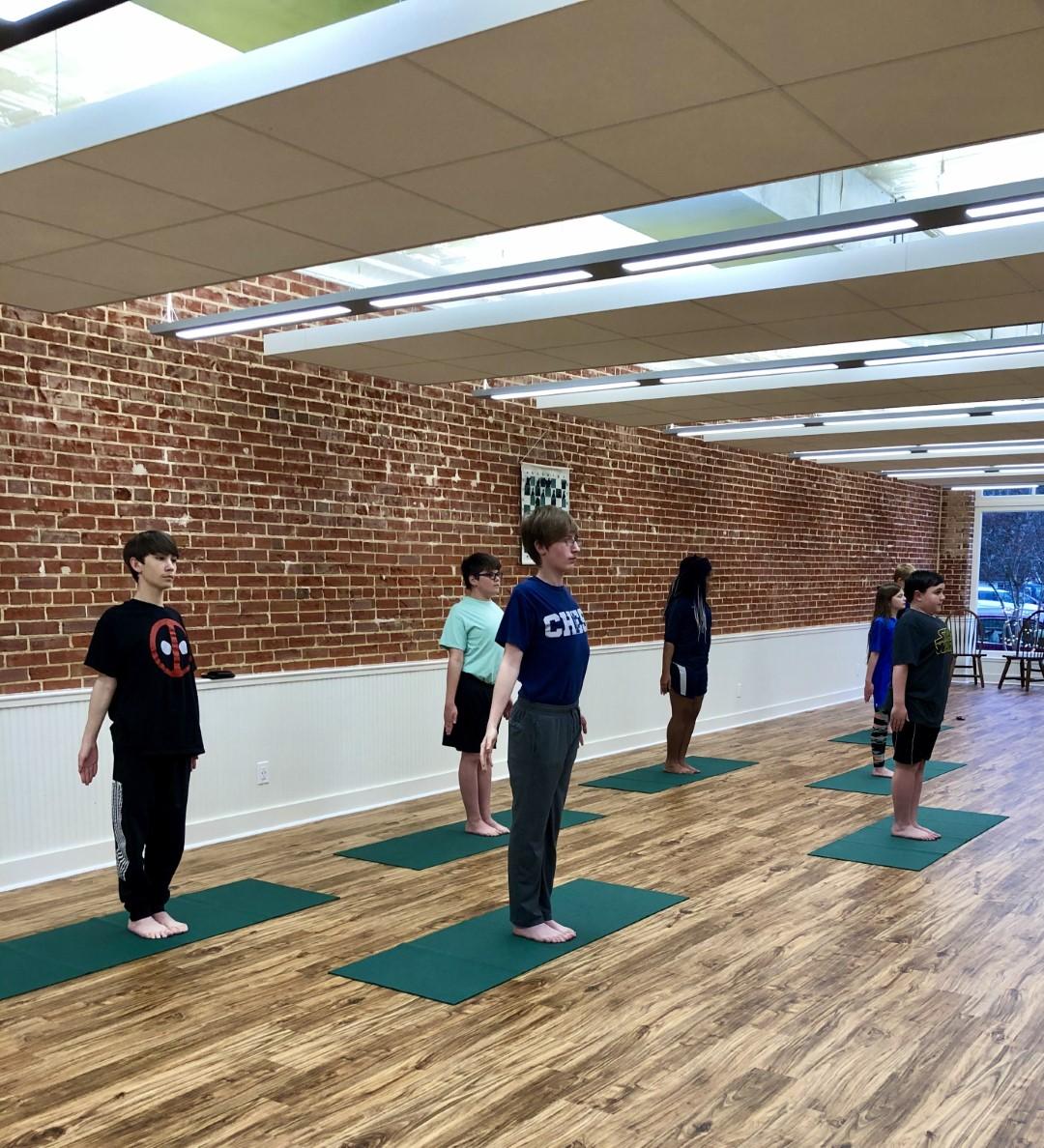 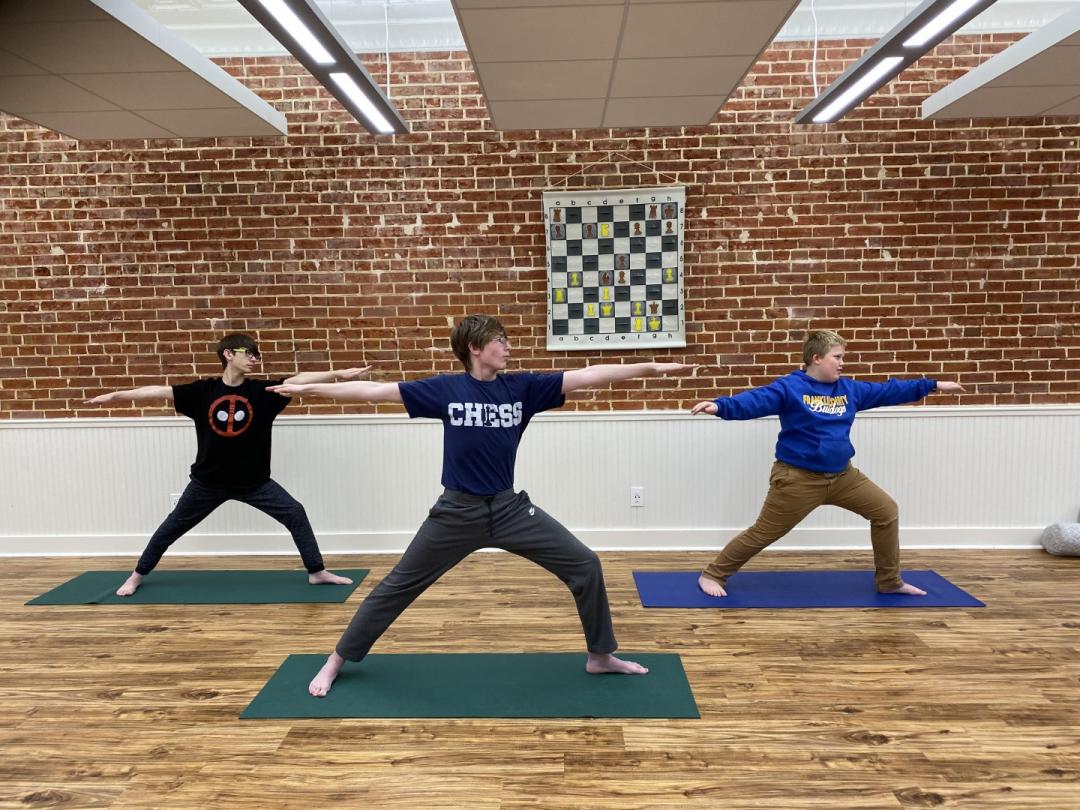 In the children’s yoga classes, Susanne incorporates standing, seated, arm balance and inversion asana (postures). The class typically starts with jumping, a dynamic and invigorating practice of movement. Susanne told me via e-mail:

After sitting through a school day followed by playing chess, the children really enjoy jumping. Standing poses help develop a solid foundation of balance, strength, flexibility, and endurance. Postures that accentuate lifting the chest, with a straight and extended spine are extremely beneficial to the children’s posture and general health. For the chess players this also translates into improved stamina and physical comfort during tournament play. Further, yoga practice filters out distractions, which helps develop attention, concentration, and self-control.

Beyond her classes sponsored by the Southwest Mississippi Chess Foundation, Susanne runs her own business, Meadville Yoga, and offers three weekly adult classes. There is some crossover, with some parents of children in the chess program attending the adult yoga classes and some adult yoga students participating in the adult chess classes. With the addition of the yoga classes and an increased number of tournaments hosted at Franklin Chess Center since the 60 Minutes story aired, the Franklin Chess Center is typically busy seven days a week. Susanne has recommendations for Chess Life Online readers looking for yoga instructors.

She writes: “Due to the Iyengar Yoga teaching certification’s rigorous standards, seek out a Certified Iyengar Yoga Teacher for yoga instruction. The website for IYNAUS has a teacher search which can be a helpful resource for finding a highly skilled, knowledgeable and effective yoga teacher. Much like looking for a chess instructor for your child, get a recommendation from a trusted friend or colleague and do your research.” California Rico Adkins, the founder of the non-profit Chess Yoga, appeared on a Mechanics’ Institute Chess Club’s Tuesday Night Marathon broadcast (from 27:40-43:04). In that November 12, 2019 broadcast, Adkins compared calling football plays to thinking in chess, as he has coached football at the high school and college levels. Adkins also discussed his two passions, chess and yoga, and making both accessible to low-income children. 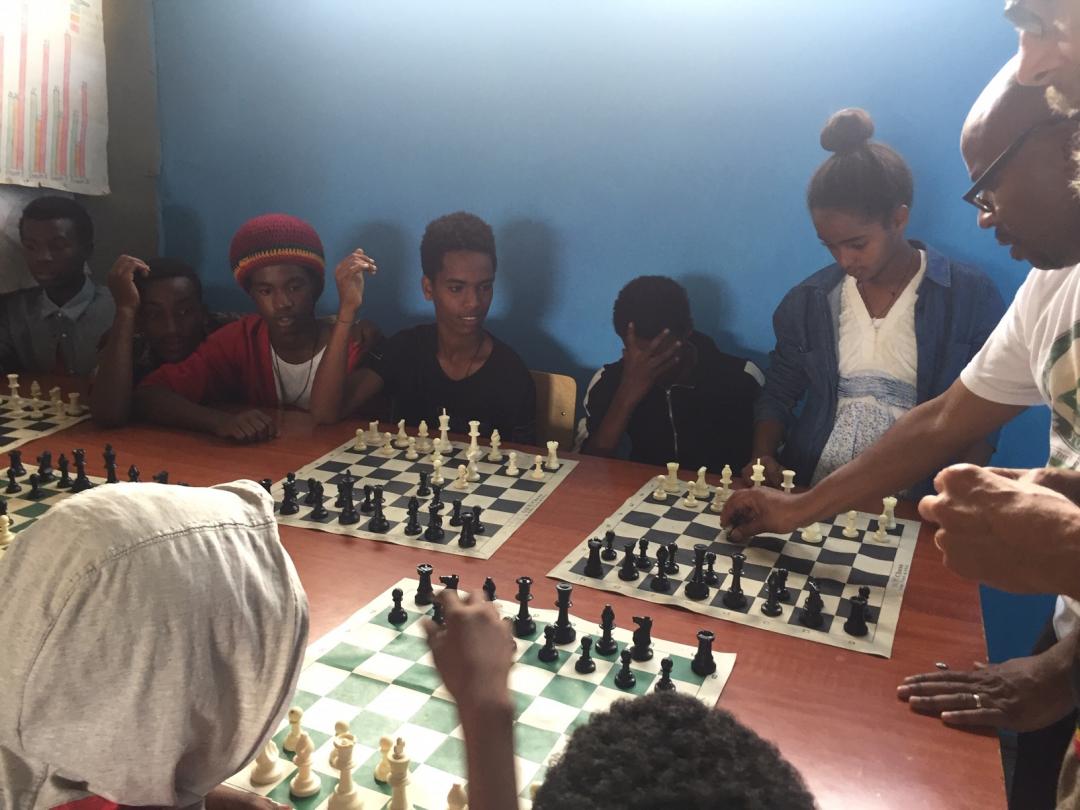 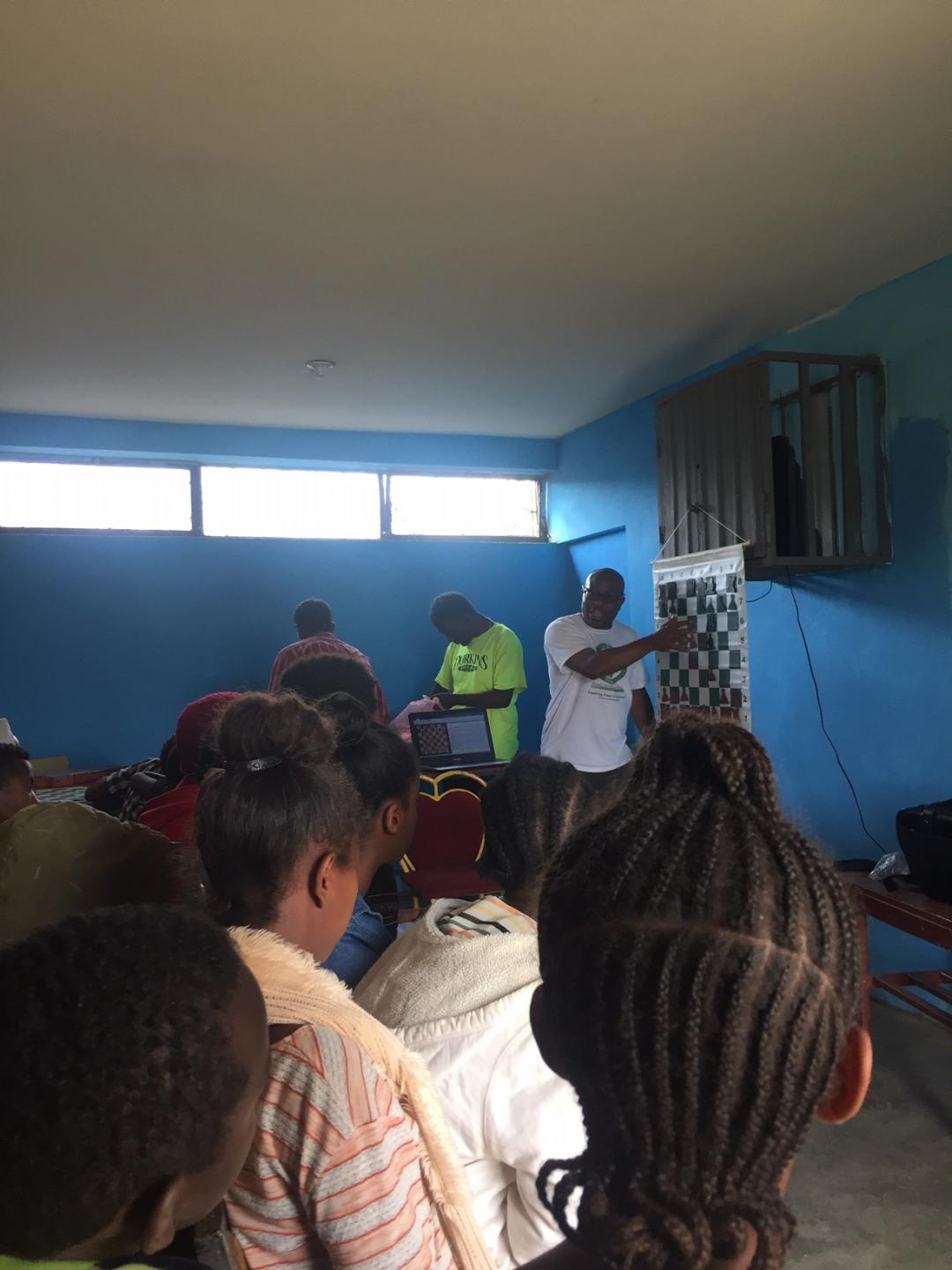 I meditate myself and I practice physical yoga as well. When my students request instruction on the best yoga poses, and they are yoga beginners, I show them the Downward-Facing Dog Pose. I also show them the Cobra Pose and the Wheel Pose. I tell them that the core of the body is important to build. To assist students psychologically, who are impatient during a chess game or at other times, I tell them to meditate and breathe, to calm down emotionally. Playing long chess games help with meditation. And yogic meditation, focusing the mind, improves chess-playing ability. … Without the financial support from donations on our website, www.chessyoga.org, many of the Chess Yoga programs would not be sustainable.

Florida Jon Haskel runs the Boca Raton Chess Club. He emailed, “The Boca Raton Chess Club has been meeting once a week for over 15 years. The club also runs one-day and weekend tournaments.” Because chess players spend a lot of time sitting, as Matthews noted in her article, Haskel sees the importance of yoga for chess players. So the Boca Raton Chess Club sponsored a yoga class for the 2019 Denker, Barber, and Haring participants. Some participants’ parents took the yoga class too. The class was taught by Anjli from the Authentic-East yoga studio located in Orlando. Haskel also provided a free yoga class at the 18th Annual Turkey Bowl that took place the weekend of November 15-17, 2019, at the Marriott Hotel in Coral Springs, Florida. 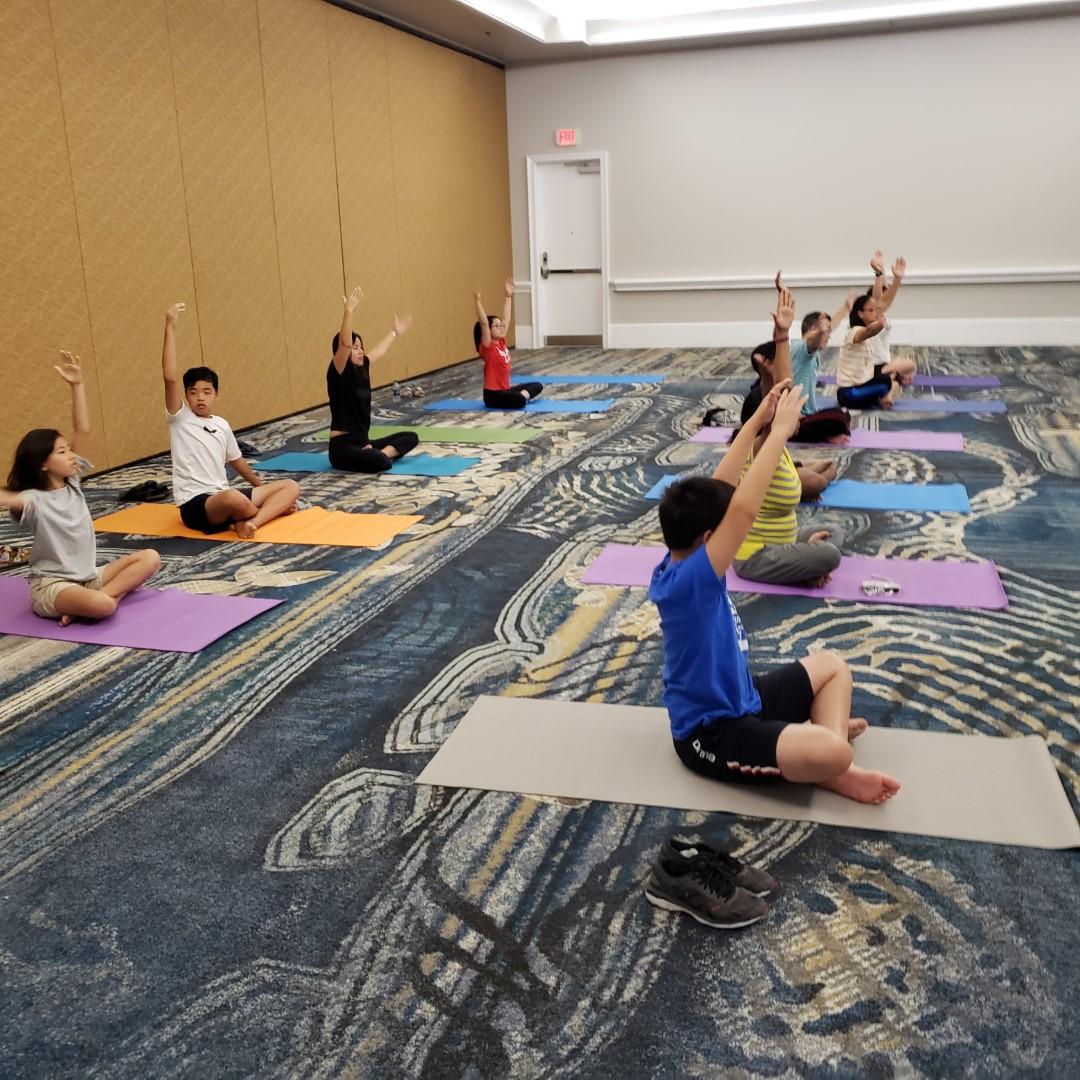 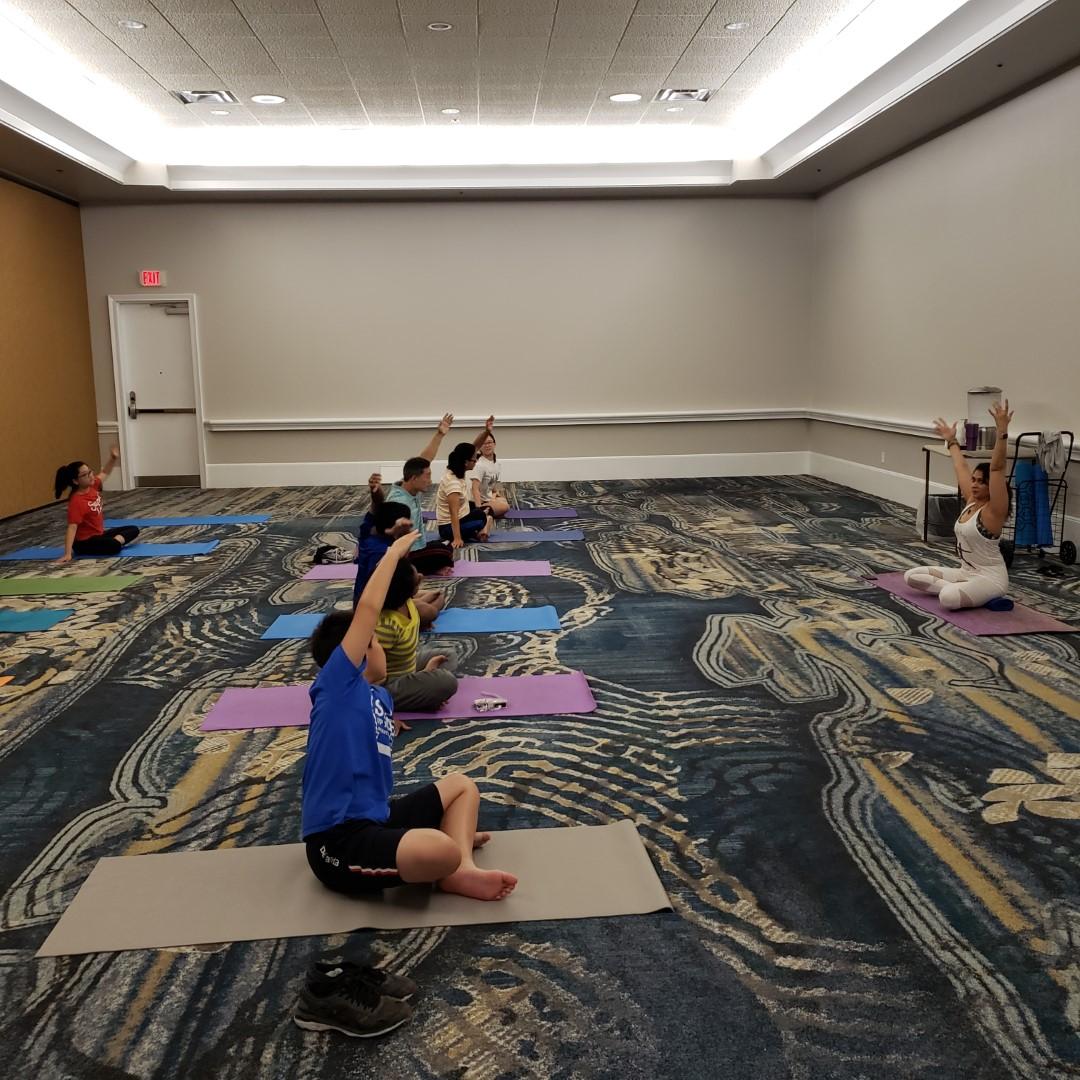 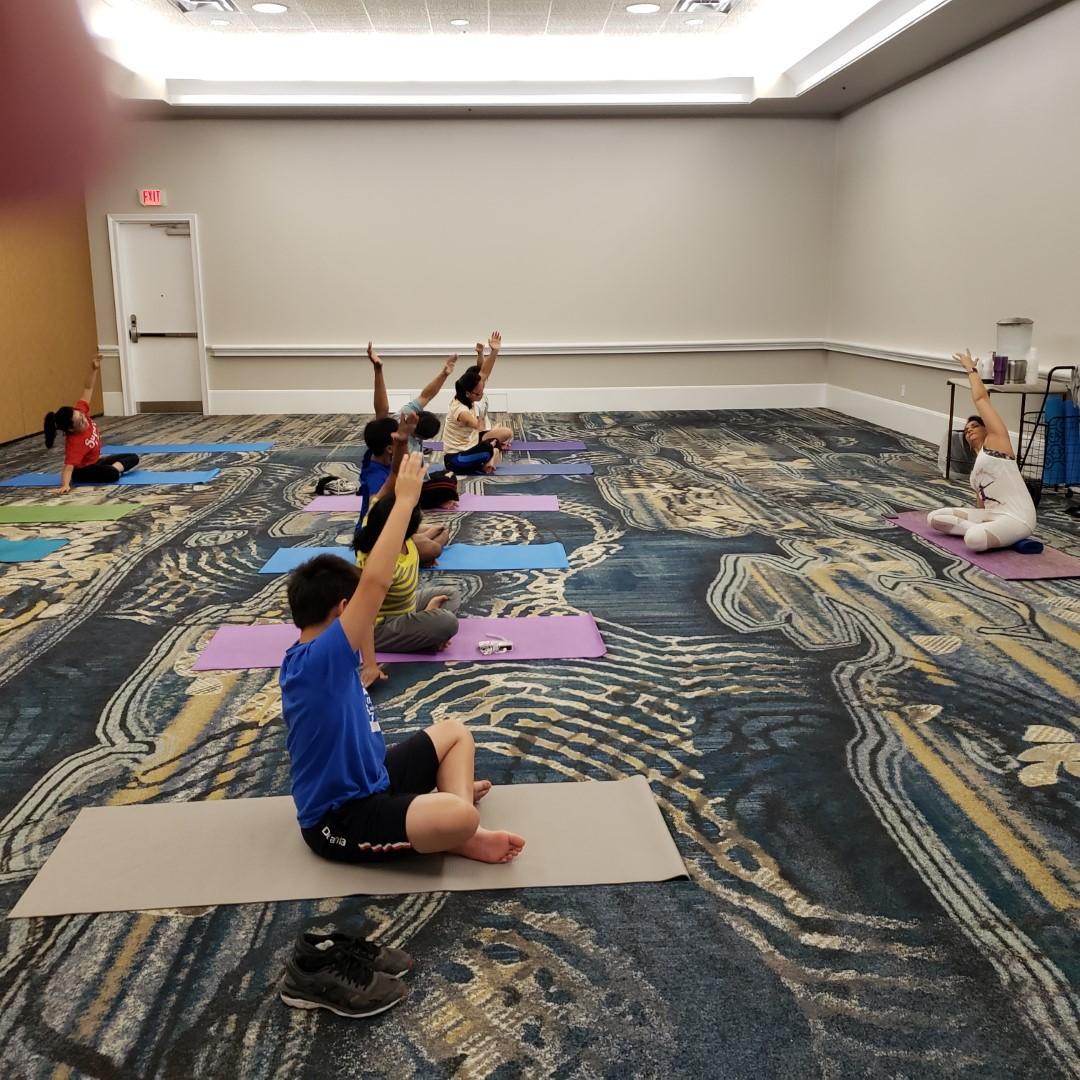 Haskel is a yoga enthusiast and sent this advice for fellow fans. “When I am working as a tournament director at chess tournaments around the country, I find the best way to try and find yoga classes, for myself, is via the Mindbody App. Locally, I go to a few different studios and after having done so I know which instructors I like more.” He added that there are even yoga mats with chess themes. If you are a typical American, you will make New Year’s Resolutions. Trying a yoga class could be one of those resolutions, to improve your body, mind, and maybe even your tournament chess results. Namaste.