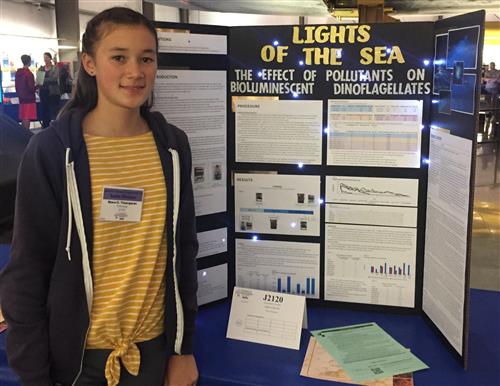 Thompson, a freshman at El Cerrito High School, was notified Wednesday by the Broadcom Foundation and Society for Science and the Public that her science project “Lights of Science” was one of 300 projects nationwide selected to compete in the 9th Annual Broadcom Masters competition.

As an eighth grader last year at Korematsu Middle School, Thompson’s project won fourth place in the Toxicology Junior Division at the California Science and Engineering Fair in late April. Her project “Lights of Science” tested the effects chemical mixtures had on bioluminescent sea plankton.

If Thompson’s project is selected as one of the 30 finalists, she will travel to Washington D.C. in late October to compete in a four-day STEM competition with the possibility of winning a $25,000 prize or several $10,000 prizes.

The top 30 finalists are expected to be announced on Wednesday, Sept. 18. The 30 finalists will compete in team challenges aimed at demonstrating their mastery of 21st Century skills in each of the STEM areas.